Hypnotherapy is a proven method that’s been used to eliminate fears and phobias for decades. While no method will ever be 100% effective, it’s really quite amazing just how quickly a little hypnosis and NLP (Neuro-Linguistic Programming) can do the trick.

That said, there’s one little problem… what if you’re afraid of hypnosis?

What a terrible position in which to find one’s self. You have this fear of flying, or driving, or heights, or even mascots (yes, click the link), and you’ve heard hypnosis can help… but darn it, you’re afraid of being hypnotized, too!

There are many good reasons people are hesitant to try hypnosis, and a lot of it has to do with Hollywood. You see, the idea of hypnosis, combined with a complete lack of understanding as to how it is produced and how it actually works… well, mix those ingredients together with a clever script, and you’ve got yourself a highly-entertaining movie!

One of the first things I do with nearly every client I meet is to debunk all the misinformation about hypnosis that has permeated our society thanks to some creative, yet naive writers in Hollywood. Now, I must confess that I love movies… even a few that portray hypnosis inaccurately. So here I’ll discuss a few of the more recent and/or well-known movies that have used hypnosis, let you know where they went wrong, and whether they’re worth seeing as well.

The Manchurian Candidate (1962) (photo above)

While the 2004 remake with Denzel Washington attempted to update the story, the original was far more controversial. In fact, after the assassination of JFK, the film was withdrawn from movie theaters throughout the United States. It was banned in Eastern bloc countries until the fall of communism in 1993.

The plot involves a military officer who is captured by communists and brainwashed through the use of hypnosis. Once he is released, the officer responds obediently to every post-hypnotic command he is given by his captors, usually over the phone. They tell him to play a game of solitaire, and when he views a particular card, he becomes a mindless pawn who blindly follows their every command, including cold-blooded murder.

This is a very entertaining and creepy movie that I would strongly recommend. However, as a hypnotherapist, I must point out that hypnosis is a voluntary process that requires the cooperation of the subject. No one can be forced to do something against their will, either during or following a trance.

In this film, the hypnotist is all-powerful and the subject is completely powerless. Bottom line: you always have a choice of whether to respond or not, and will never do anything against your morals or values.

This is one of my all-time favorite comedies. Anyone who has ever worked in an office environment will appreciate the humor here. The main character, Peter Gibbons, is so frustrated and unhappy with his job as a drone worker at a software company that he seeks the help of a hypnotherapist.

A few moments after the hypnotherapist begins the hypnotic induction, Peter is relaxing comfortably in a trance, “without a care in the world.” Just then, the hypnotherapist keels over and dies on the spot. Since Peter is never officially “roused” from the trance, the plot dictates that he continues to feel wonderful for days and days… skipping out on work, asking Jennifer Aniston’s character out on a date, eventually getting a promotion because he’s so smooth and comfortable during an interview with some annoying consultants.

It’s a great concept, and many hypnotherapists probably wish they were so powerful. I am thrilled to have this movie in my library, since what follows is hilarious stuff. However, if a hypnotherapist was unfortunate enough to pass away in the middle of a client’s trance, the suggestions given wouldn’t be any stronger than if the session were completed as normal. 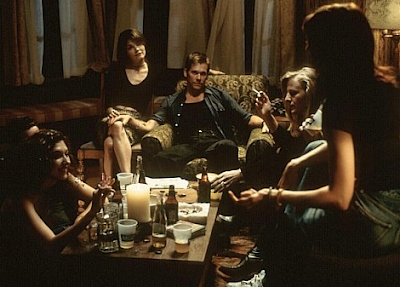 Not a bad thriller. This one features Kevin Bacon as a blue-collar guy who doesn’t believe in hypnosis, but allows his sister-in-law to hypnotize him at a party. He goes into a deep trance, and the next thing he knows he’s awake and sweating profusely, with no memory of what has happened. Everyone is laughing and telling him what he said and did, but he looks and feels stressed out and afraid.

Later that night, he begins to see horrifying images of violence and of a dead woman or ghost. Basically, hypnosis is used as a gateway to supernatural mental abilities (a common use of hypnosis in movies, including “Donnie Darko” and “Close Your Eyes”). This is a handy tool for a Hollywood screenwriter, but there isn’t any fact behind this fiction.

Amnesia is possible following hypnosis, but it is very rare for anyone to have absolutely no memory of what happened. I have also never seen or heard of anyone drenched in sweat and panicked upon awakening. Hypnosis is a very relaxing and comfortable experience. If at any point a person imagines or experiences something frightening or traumatic, they can easily open their eyes and return to a state of normal conscious awareness.

And no, hypnosis is not, nor has it ever been, a gateway to supernatural or psychic abilities.

See All Reviews
Facebook API Error: {"error":{"message":"The 'manage_pages' permission must be granted before impersonating a user's page.","type":"OAuthException","code":190,"fbtrace_id":"ADUQjJdv93ofWDwupyZ9cLc"}}
Reconnecting to Facebook may fix the issue.
See All Reviews

Pure Hypnosis | The Heartbreak Hypnotist
5.0
Based on 4 Reviews

Nikita H.
2018-11-02 16:09:53
Sean is simply amazing. Seriously the real deal. He is so patient. Honest. Forthcoming with great stories and has the quick ability to relate and challenge...

Juan B.
2015-02-18 13:17:30
Sean cured me of a severe fear of flying several years ago. I have the freedom to travel which would not be possible without his help.
See All Reviews